Emmet's Hercules is the biggest, amazing film of the Oscar Awards was directed by Allis Jackson in 2018 to 2019, while it's the parody of The Lion King 1½ in 2004 movie. to producers and writers of Hazbin Hotel, created by Vivziepop, also known as Vivienne Medrano. And then the every sites at DeviantArt, Tumblr, and Twitter.

FROM THE PRODUCERS OF HAZBIN HOTEL

Other voices of Samuel L. Jackson

On a light blue background, some letters bumps out of nowhere. As a blue "W" runs by, a blue "O" rolls down and a blue "I" slides while a blue "A" spins around. Then "I" comes back, trips, and loses its dot. A blue "P" dodges it and it hits the "S". The dot bounces off a ton of letters while the (now dotless) "I" tries to catch it. Then all the letters bounce back and are revealed to be the letters in the logo of "Warner Bros. Pictures" and spins to "Warner Animation Group". The logo slowly zooms out until Emmet jumps in, and roars with a lion sound, while all the letters screamed and falls down. Emmet chuckled while he pulled down the scene into the introduction.

On a white background to distribution version at a great CGI, we see Emmet running along a solid blue surface towards an remote turned on its side. When he reaches the remote and embraces it, the surface suddenly tips to the right, so Emmet runs to the left and closer to the screen, causing the surface to tip towards the left, becoming increasingly vertical. Emmet scrambles in vain to tip the surface back to the right, but ends up clinging to the vertical surface while his remote falls off-screen. The camera then zooms out to reveal the vertical surface is the left side of the "B" in "Blue Sky" (the word "Blue" is in cyan while "Sky" is in dark blue), with "STUDIOS" seen below. Emmet then leaps from the "B" after his remote, and dives off-screen.

Me: (narrated) Now, where to begin? How about "A long time ago..."? (He holds up a remote and pauses it, But suddenly, Emmet is in the screen and walks in.) How many times have you heard that to begin a story? Let's do something else. (He gasped) I got it. I got it. Here we go. Here's how to open a movie.

(A camera pans to the snowlands.)

Me: Oh, what? (The screen goes black again.) No, I don't think so. It sounds familiar, doesn't it to you?

Me: Oh, no, no. Not in the book. How many have seen "opening the book" before? Close the book. We're not doing that. Here's what we're gonna do. Why don't I just go back to the day things took a turn for the worst?

(A music plays in "The Gospel Truth" from Hercules.)

Me: Oh, I know! How about Hercules, who subdued and destroyed monsters, bandits, and criminals, was justly famous and renowned for his great courage. His great and glorious reputation was worldwide, and so firmly entrenched that he'll always be remembered. In fact the ancients honored him with his own temples, altars, ceremonies, and priests. But it was his wisdom and great soul that earned those honors; noble blood, physical strength, and political power just aren't good enough! Heh, I thought it wasn't cute.

Me: Back when the world was new

The planet Earth was down on its luck

Me: (angrily) Oohh! (nervously) I thought it was even good there.

Me: There was a mess wherever you stepped

Where chaos reigned and earthquakes

Me: Entire life is only efficient days to not for stop!

Me: And then along came Zeus

He hurled his thunderbolt

Locked those suckers in a vault

And on his own stopped chaos in its tracks

And that's the gospel truth!

The guy was too type A to just relax

And that's the world's first dish

Zeus tamed the globe while still in his youth

Though, friend, it may seem imposs'ble

(A record scratched and Black Hat stops the music, He grinned.)

Me: Mister Black Hat! I thought I saw you!

Me: I thought it's on the movie, Hercules!

Black Hat: Now that's great, So, What are you waiting for? Let's make about to Behind the scenes of Hercules!

Me & Black Hat: On Mount Olympus life was neat

And smooth as sweet vermouth

Although, buddy, it may seem imposs'ble

(A song ends, The screen goes black, the title "Hercules" crashes onto the screen, followed by a "Emmet's" which forms the crooked "Emmet's Hercules" logo. Cracks appear across the screen image, and the black screen shatters and falls from the field of view in fragments, Emmet appeared on the black screen. He holds up a sign that reads; "Coming 2019". And the teaser trailer ends.)

Phil: Well blow me down, kid!

Artist: You got it, dude!

Phil: Cut it out.

Artist: Well pin a rose on your nose.

Hercules: Talk to me.

Artist: You're in big trouble mister.

(George was pinned down by his sharp teeth. George unpinned himself.)

George: Buddy? He called me buddy. (He looked for his acorn, which fell from the sky on his head. Embracing his nut.) Oh, there's my acorn! I got to go then. I've get out of this house right now. I've got to go to THIS one! (George got up, no worse for wear and prepared to marches off, And starts marching off to mountain of Bungo Valley.) Ladies and gentlemen, George, has left the haunted house!

Deniece Shark: Attaboys, don't yourself to giving up to!

Deniece: Aren't you give it self to beings itself? Man, I LOVE IT, I LOVE IT, You scaring me up to much as are! I'd really love this one! I'd really! (The sharks ends pumming) Paul! Did you eat the fish?

Deniece: Did you eat the fish?

Fish: (Speaking from Paul's mouth) In despicable for every time of me, as we should never eats the fish.

(Paul spits the fish out, covered the mucus)

Fish: (Slimed) Yeech. Not time at all. Well thanks a lot, stupid shark. Now I'm so wetty, What an dispatcher.

Fish: I think you're stupid.

Fish: You are too!

Fish: Eep! (swimming from the sharks) You're never take me alive!

Thing 1: Did you hear that?

(Beat, then Emmet comes out of the ship wearing his superhero suit as adventurous music plays)

Romana: Hmm, I think you are a singer, don't you?

Romana: Yes, you. You are a singer.

Me: Glad to seeing you, pals. They think Hercules is fighting the titans.

Yakko: The titans? That was quite awful.

Thing 1: I wish Hercules wants to fall in love at Megara.

(All the demon pirates laugh and swords toward to Emmet)

Me: For pete's sake, I don't fight demon pirates.

Me: Woah. (imitating Henry Kissinger) I feel the dial of canine process is beginning to going down.

Me: Tra-la-laaaaaaaaa! (Demon Crows are confused, and walks away)

Demon Crow #1: That was strange.

Demon Crow #2: What the heck was she talking about?

Demon Crow #6: Does she mean that?

Demon Crow #3: Are we really killing us?

Demon Crow #6: I cannot believe she said that.

Demon Crow #7: I guess we could eat her meats in, seeing how we’re twice her size, but… Oh no, I’m just so hurt! (cries)

Sir Pentious: If they kiss, I'm going to puke.

Leonard: (irritated) I did not ask you what you think!

Leonard: No, No! That was a rhetorical question, too! Ugh! I gotta see "Emmet's Tarzan".

(Jacob cracks his neck one way and then the other, grunting. As Leonard clatters off-screen, Jacob scratches in his ear, and sniffs)

Jacob: Wait, where you going? (He runs off-screen, too)

Rusky: No one cares about, Mandrocks.

Rusky: We are so gonna slap you for monologueing over our denied!

Buffy: Are we really so non-threatening?

Rusky: That's it, you're all getting accident!

(Sounds of beating are heard)

Rusky: We're really stupid at this! 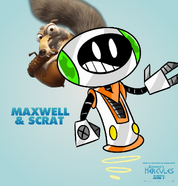 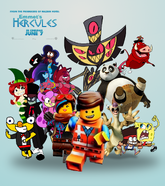 "The wait is efficiently for Emmet's." 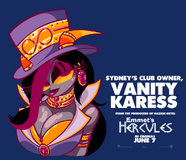 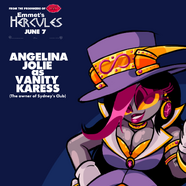 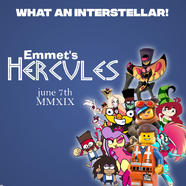 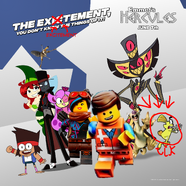 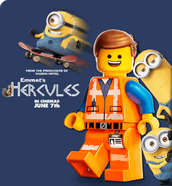 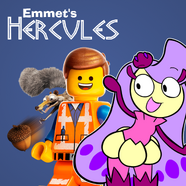 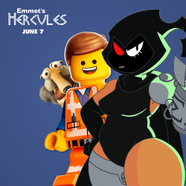 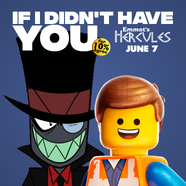 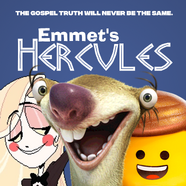 "The gospel truth will never be the same."

Add a photo to this gallery

All the Trailers Transcripts

All of Commercials Transcripts

Retrieved from "https://dthq.fandom.com/wiki/Emmet%27s_Hercules?oldid=1482"
Community content is available under CC-BY-SA unless otherwise noted.